Introduction
Telos Magazine seeks to disseminate a critical Christian theological, as well as general religious and non-religious oriental thought that is daring in its nature and pluralist in its intellectual, religious and cultural backgrounds. By this, it aspires at opening a venue of dialogue and discussion over the relation between belief and the human and societal life affairs in the Orient, which includes issues of identity, politics, economy, environment, education, science, and other aspects of contemporary challenges related to religious and non-religious human life conditions; such as:
The Journal shall not publish contributions that are indoctrinating or divisive in nature and language. On the other hand, the magazine would welcome gender-sensitive texts and be guided by human rights in their content and language. The magazine also refrains from becoming a platform to defend or market any political discourse (in the narrow sense of the term), partisan or ideological, or to provide biased texts to one party against another, taking into account the diversity of intellectual, political, ideological and faith spectrums in the Arab world

The Editorial board affirms Telos Magazine's independence, and that it does not belong and does not represent or speak on behalf of any governmental or non-governmental institution, organization, church or religious sect, whether in the Arab world or in the West. It Also affirms that any similarity in names with another Christian institution or body is nothing but random

Establishment of the magazine
In fall of 2018, a group of professors and writers working in the field of Christian theology in the Arab countries met online: Dr. Michel Andraos, Dr Asaad Kattan, Dr. Najib Awad, Dr. Christo El Morr to discuss the creation of a Christian theological forum that provides an enlightened insight  into a complex, and sometimes dark, reality in the Arab World, especially with the emergence of extremist views are spreading in many places. Hence, the participants agreed to launch a non-specialized electronic theological magazine that constitutes a permanent workshop for launching an open critical theological testimony to the telos lived in the flesh and in history, in the here and now, a teslos that is Life in Jesus Christ

Telos was chosen as a name as a reminder of the last purpose of a Christian life; the acronym can be derived  from “Testimony for REason, LOve and LibertieS”, a testimony mostly needed in a world that is in acute need of love and freedom, and that succumbs into closed mindedness and hatred, in which Christians often deal with God magically, and approach the affairs of the Church, faith and society irrationally. Timothy's verse, "The purpose of the commandment is love," reminds us that the Telos of faith, in every thought, project or action we engage in, is to live a loving union with the other: the human and with the absolute other: God-Love. It also reminds us that this purpose (telos) is the compass of every thought, action and project that can be called Christian

Within weeks, the first team Rev. Dr. Mitri Raheb, Dr. Pamela Charabieh, and Dr. Anne Zaki joined the founding editorial board. The first issue was launched in November 1, 2019 during CAFCAW 2019, in Cyprus 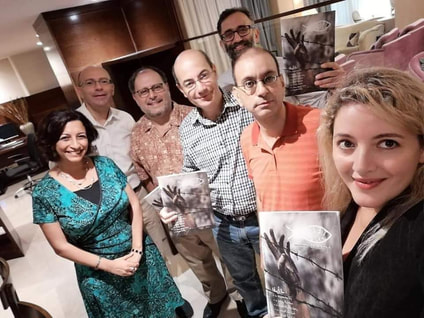